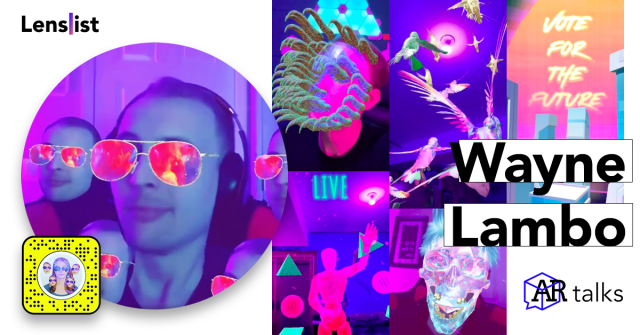 If you’re a loyal follower of all things AR, there’s no way you haven’t heard about Wayne Lambo. His amazing futuristic Lenses stole our hearts a while ago and it’s finally the time to share his story and AR journey with the whole Creator’s Community. Read the interview below to learn more about Wayne, his style and inspirations and also a few pieces of advice he gave to less experienced Creators!

First things first – please tell us more about yourself, where are you from and what is your background?

Born in Florida in 1987, my dad was in the US Navy so I moved every couple years, went to highschool in Sicily in Europe.Went to college for 2 years after highschool but ended up joining the US Navy myself and was stationed in San Diego California. Did 3 deployments to the Persian Gulf and got to stop in a lot of foreign ports in Asia and the Middle East (Dubai etc.).

Got out of the Navy after 4 years and went back to college to get a degree in Web Design and Interactive Media at the Art Institute of San Diego CA, I think it’s shut down now, haha.

Started my web and graphic design company www.innerspacewebdesign.com in 2017 after working for several small businesses and a non profit in LA.

Now could you describe your AR journey? When did you start, how did it all come about and at what point did you decide to go pro and open your own — Inner Space Design Studio?

I started learning about AR back in 2012 or 2013 when I was in college and was immediately drawn to it and saw the future potential with phone cameras being able to handle the tracking and 3D graphics.

I never worked on anything AR related until Lens Studio was released in 2017 and I decided to try it out and make something. I made a few Lenses and didn’t check back until 2018 and saw I was getting a lot of views on some of my Lenses and continued to make them.

It became a huge creative outlet for me while my dad was fighting cancer and I started making Lenses almost daily. He passed away in 2018. I applied to become an Official Lens Creator in 2019 and to my surprise was accepted, so I’ve been making Snapchat Lenses ever since.

As an AR Creator, do you consider yourself more of an artist or developer? And which skills (or maybe a specific approach) do you think are the most important at the beginning, for somebody who wants to start creating in Lens Studio?

I am a weird mix of artist and developer, I’ve become more artistic over the years but I also enjoy enhancing some of my Lenses with scripts and minor code. I can understand code and it’s logic usually and enjoy using the pre-made stuff that already works. Scouring lines of code trying to get things to work properly is not my idea of fun, haha. Luckily you can make awesome things in Lens Studio with zero coding knowledge.

At the beginning I would say just dive in and experiment with all the premade templates Snap has already made. It’s the easiest way to learn the basics. Just learn how the program works and how things are connected and how to change or add things to your project. Then you can start experimenting and bringing your ideas into reality.

Your Lenses have a very specific style – lots of neon, pink and glassy, see-through sculptures, all with a futuristic feel to it – what is the inspiration behind that? My guess is you’re a fan of anime, but one can ever know 😁

Yes I love Anime and futuristic cyberpunk neon vibes, haha. I’m a huge futurist and movie/sci fi nerd. I am ready to upload into my robot body whenever it’s available. Haha. I like to think about having AR glasses or Contacts and being able to see people walking around with these different AR masks.

Please pick 3 of your favorite or most memorable Lenses you made and tell us more about the inspiration behind them, creative process, maybe there’s something important you learned while making it?

So many Lenses, last time I counted I made over 300 community Lenses. Haha

Vote for The Future – This is the Lens I am most proud of. I worked with Snap to include a voter registration mini link in the Lens which took people to an internal Voter Registration form so they could vote in the 2020 election in the US. Over 213,000 people used my Lens and potentially registered to vote!

Green Future – I made this Lens for the Lens Fest 3 hackathon last year and put all the skills I have been learning since I started into it. It’s just a surreal type lens to convey someone living on a healthy planet out in nature.

Oil Futures was supposed to be included in the previous Lens so you could switch between the two but we ran out of time. It’s the opposite version of the healthy planet Lens.

Retro Dream Portal – I learned a lot creating this Lens and started to realize how I could create my own Augmented Worlds and experiences within Lens Studio. Definitely want to explore other platforms with world building capabilities. I’ve recently been making complex games in CORE, this new platform by Epic Games (PC required to play).

Snap keeps surprising us with more and more innovative, sophisticated features coming to Lens Studio. Which of the newest and most advanced additions (e.g. Full Body Tracking, LiDAR, SnapML) is your favorite and why?

I don’t really have a favorite, all of these features are needed to complete the final vision of a fully augmented reality overlaid onto our existing reality. I’m just excited to be a small part of it all and hope my work and ideas have some impact in shaping Lens Studio and the AR future.

Recently I guess the Full Body Tracking has impressed me the most and it’s getting better with SnapML training.

I’ve seen you’ve stepped into the NFT game with your design called Digital Awakening – what do you think about blockchain and NFTs as a channel to sell and monetize your art? Are you going to explore it further?

Haha yeah. I wanted to give it a shot just so I know how to do it and I thought people might be interested in owning a custom Snapchat Lens no one else has access to. I realized it’s more complicated than just post and sell. You have to get past several barriers to get on the main marketplaces like Nifty Gateway etc. and I feel like if you don’t have a huge following already on Instagram your stuff will just be lost on the blockchain. Haha.

I definitely see the potential in using blockchain technology for all kinds of different applications, right now the whole gas fee situation seems scammy. I’ve been looking into other platforms that do not charge gas fees like Immutable X. I might try to release more NFT Snapchat Lenses, I think Snap should put the Snap Lenses on their own blockchain so we can sell the community Lenses we made already. Thinking about building my own app and dropping my exclusive AR stuff on there maybe.

You’re super prolific as a Creator and even we struggle sometimes to be up-to-date with your Lenses (👏) and your work overall was already viewed over 182 million times on Snapchat – do you have any advice for other Creators on how to make the workflow more effective and less time consuming without compromising on quality?

Thank you. Yes for a while I was trying to put out several Lenses a day. Idk if you know JP Pirie (shoutout to JP!), he’s been like an AR mentor to me, he’s an OLC as well and has made over 2000 lenses I believe. He gave me the best advice when I was starting out which was “Let them be the Critics!”, meaning don’t be so judgemental and critical of your own work, so that you don’t ever create anything. Just launch it! See what happens. Never stop learning new things.

I am still a perfectionist which is why I guess I try to keep the “quality” at a commercial level. In terms of workflow I usually have an idea of what I want to make and then gather assets that I think would be cool to use. I have a huge library of 3D assets I can use. The majority of the 3D models I use are from sketchfab and cgtrader, lots of great content for sale on gumroad also. Lens Studio has a growing Asset Library of great tools as well.

Huge thanks to Wayne for taking the time to answer our questions!! BTW, he just had his birthday, so please share the love with him, Creators! Happy belated birthday Wayne! 💖 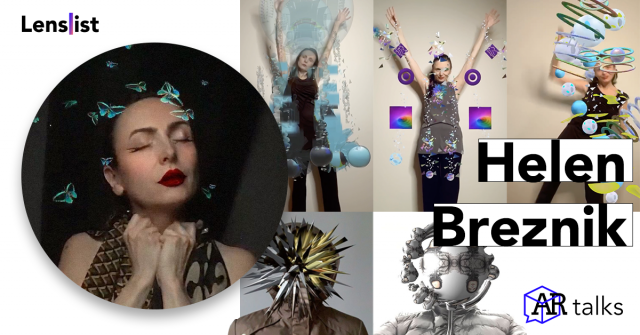 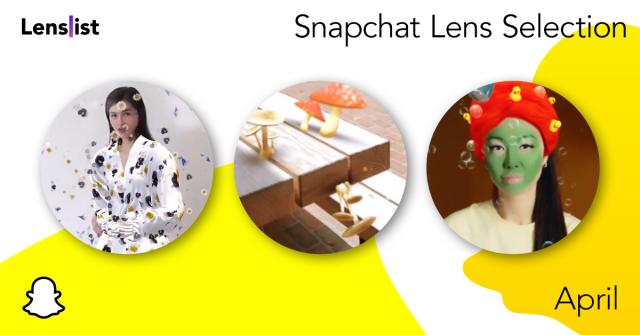