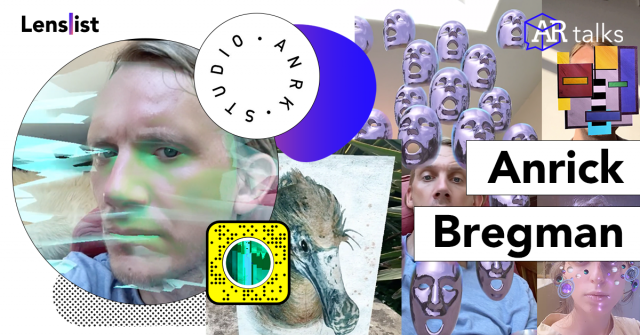 Anrick Bregman is a super talented Official Lens Creator and founder of his own creative studio – Studio ANRK. We took notice of him a while ago and were very much impressed with the series of Lenses he made, inspired by Hieronymus Bosch’s art and era he lived in. No wonder Anrick picked Bosch as his muse – they share the same geographical roots, but you’ll find out more about his background, style and future plans from himself. Let’s hear it from Anrick! 👇

First, please tell us more about yourself – where are you from and what is your background?

I’m from the Netherlands originally. But live and work in London. I started to work as an interactive director over 10 years ago, mainly doing experimental web-based experiences, such as this old project Attraction which is still one of my favourite projects.

I went from Flash, to WebGL, and then to 360 cinematic VR, and then started to experiment with Augmented Reality. Unity was already a part of my early work flow working on games, for example, and I built a VR game in Unreal around 2015, which was the starting point for me to focus fully on AR and VR using game engines.

Please describe your AR journey – how and why did it start, how long have you been active in this space?

I started to work in Virtual Reality initially, and that connected me to the Augmented Reality scene. Both are similar, and have a really strong community aspect, which I find rewarding. I got more deeper into AR when I joined Snapchat as an Official Lens Creator, and started to collaborate with other OLCs. It’s been great to learn from each other, its a really excellent group of people.

Now tell us more about your inspirations – looking at your Lenses like the ones with Omuamua, Jupiter or Saturn on Earth – I think we have joint interest in space and astronomy :)) Do you consider space one of your favorite subjects?

I definitely love all scifi and astronomy subjects, haha. I have been fascinated by the future since I was a young kid. I always dreamed of exploring the universe. And with AR it becomes a little more interesting, than flat photos. I have a new astronomy project in the works now, my biggest one yet. I can’t wait to share it.

But equally, history is inspiring to me also. You can see that in projects like Dodo, for example. Where I tried to bring to life a 500 year old painting. Or the Hieronimus Bosch characters, which I built into an AR app.

I’ve seen you made multiple Style Transfer Lenses – what do you think about introducing more ML into the AR world? Are you planning to experiment with it more

I think the things we can do with ML are hugely powerful. But I have to explore it a bit more deeply, and I want to look into the practical potential, tools that could be built by combining AR and ML are really fascinating to me.

You’re an OLC and from what I know you don’t design anything in Spark AR – what is the reason for your creative commitment to Snap and Lens Studio?

I worked quite a bit with Spark AR for clients, and I have posted some personal projects as Instagram filters. The Dodo project for example, was initially built in Spark. I then made a Snap version of it later.

But I never found much engagement with Instagram filters. I don’t know if its because I am not active on Instagram, and don’t have many friends/connections. Or if its just that Snapchat’s algorithm is a little better – I when found posting filters to Instagram on my account they get absolutely no views whatsoever. So I got a little discouraged by that. In addition, Spark AR (Facebook) are very strict with how you can integrate menu systems, graphics, and interaction mechanics – it is much more difficult to get your work approved than with the Lens Studio approval process.

I really liked the Lens you did for Spectacles – are there any important differences when it comes to the development process, compared to creating Lenses for smartphones?

I tried with the Spectacles Dreams project to create a typography-based concept, and to build in a timeline, so you have a series of frames. It felt interesting to combine progression into the idea.

You run your own studio (congrats!) – please tell us more about your experience in working with brands and clients. Do you have any advice for Creators who think about starting their own companies?

The good side of running a studio is that it is a great place for two things. Firstly, to experiment self-made work, R&D basically, to explore new technology or new ideas. And secondly, to work with clients, and combine many of my friends and fellow AR creators (and especially OLCs) into the process. I often build teams of 4 or 5 people, per project. And I usually run about 3 or 4 projects at the same time. So there’s a lot of collaboration and fun, while also of course making sure the budgets are good enough.

I’d say the more challenging part of running a studio is to make sure there’s enough time left over for the R&D and client-based work can be intense.

And it is always challenging at the very start of any project to talk with clients about what they need, and to guess the right budget and timeframe needed to make it a reality. They usually only have a concept, and there are usually very few examples we can reference – we’re talking about very new ideas.

I always spend a lot of time with the people who commission new work – to get a good sense of the specific needs of a client. Because the outcome isn’t so clear, you’re usually going to make changes throughout a project. And what a client is asking for might not be the exact right thing for them once it is in AR – so those are important discussions.

My advice to anyone always is to spend time developing a concept in detail, because starting to build it out. You can answer many questions when you think logically about how it would work best, and imagine various ways the idea might run into problems.

Your most recent Lens called Low Rider includes an amazing 3D model – please tell us more about the creative process, it looks so advanced! Do you have any cool tips or tricks for creating models?

Well all the credit goes to a Sketchfab creator called TuppsM – he did a wonderful job of creating that vehicle, and making it freely available under the creative commons license. I just downloaded it and spent time optimising it to fit into Lens Studio – which was a good technical challenge.

I’ve created many 3d assets from scratch though, for use in AR, from the Oumuamua elements (a full solar system) to a realistic looking Rhino and Sea Turtle for my friends Hashtag Our Stories! It’s such a huge challenge to work within 4mb, but always amazing that if you work very hard at it you can manage.

I think the technical challenges of 3d modelling are still a big barrier for many people to enter the AR space though, which is why the Asset Library in the latest version of Lens Studio is such a wonderful addition. We should always try to open up the door to more creators where possible, and lower technical barriers as much as possible.

Anrick, thank you for sharing with us! Keep up the good work. 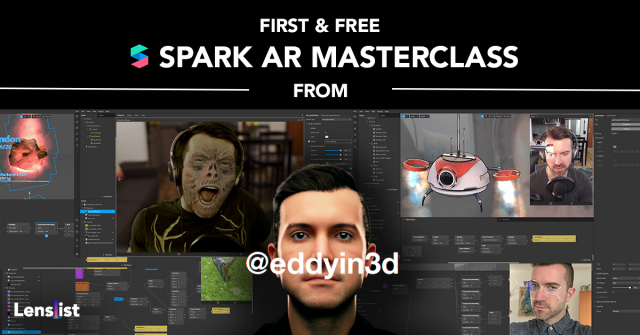 Full Spark AR Masterclass By Eddy Adams Is Out 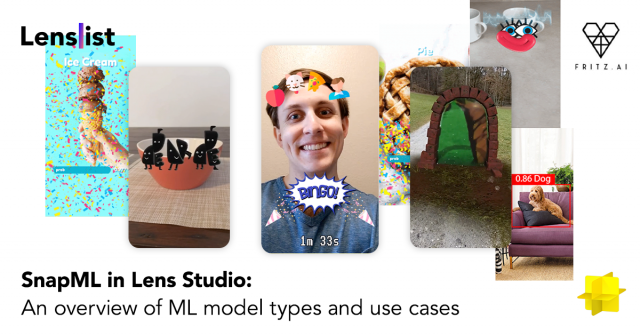 SnapML in Lens Studio: An Overview of ML Model Types and Use Cases