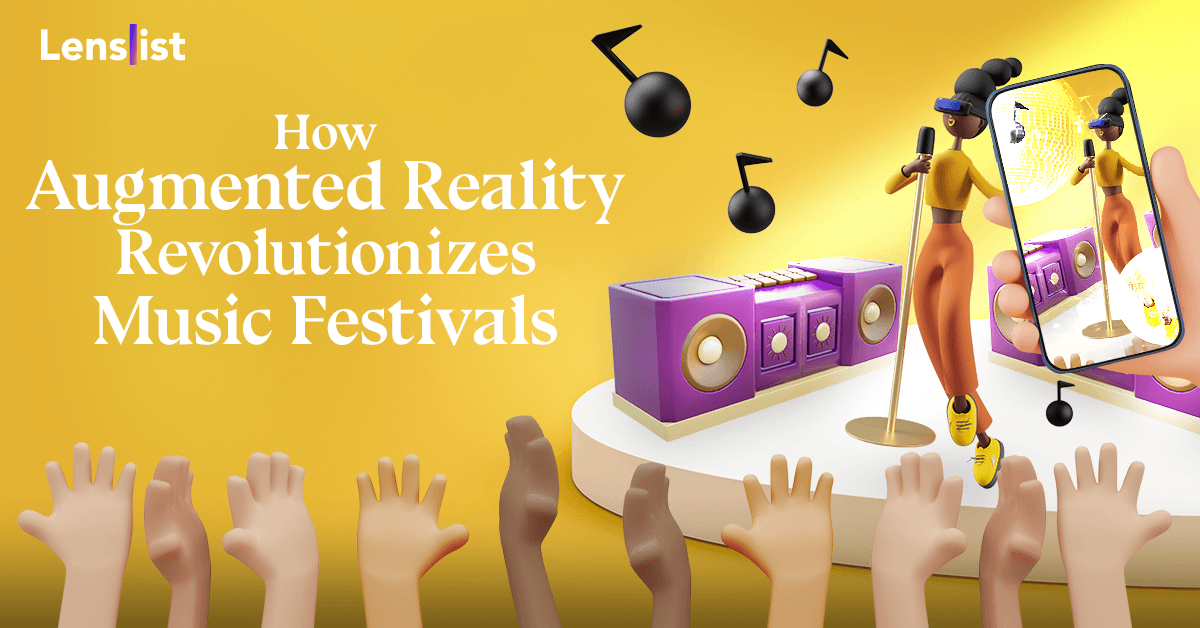 What do people love about festivals? Energizing live music, favorite artists going wild on stage, steamy atmosphere, thematic tents… and unforgettable memories made with friends or people that you’ve just met. Undoubtedly, music festivals are one of the most anticipated events not only for music lovers but also performers and brands all around the world. They offer a space for all the artists’ visions and pandemic-induced wants to come true.

Festivals are also a kind of visual experiment, therefore always seeking innovative, different ways to stand out from other events and surprise festival-goers with something unforgettable. What if people could expand their senses and bond with music and other people – and not only those they’re with on site – in a way never-experienced before? Technology has always been an essential part of music festivals – lighting, special audiovisual effects… but what if it was used for exploring our senses even deeper?

That’s where Augmented Reality comes in. For some time now, music festivals have been making room for high-tech and Augmented Reality proved once again to be an amazing partner. Starting from the basics, AR can be your festival guide used in terms of practical solutions such as pointing to the nearest restroom or helping you geo-locate your friends. What’s more, the possibilities of AR unwind fully also on the artistic side. Imagine the latest album is about traveling in the future – you could make flying spaceships appear right above the audience, with viewers’ pointing their phone to the sky. Or maybe the main theme is nature – imagine there could be plants or magical creatures appearing from the ground. Not to mention sound-activated installations – where objects seen through your camera react to music and turn into a visual performance. Possibilities of AR are endless.

The rise of AR in music

The first big AR moment in music that made it to headlines was a U2 concert back in 2018. Eminem and Maroon 5 followed in the footsteps of immersive experiences and since then, the rise of AR in the music world truly began. Now we’re witnessing the biggest music festivals like Coachella collaborating with 3D software developers to enhance the experience for not only the people at site, but also for those at home. For Flume’s Coachella 2022 concert, the electronic artist and DJ from Australia gave at-home viewers a truly exotic surprise – the YouTube livestream was enriched with psychedelic 3D visuals and parrots floating around the stage.

How can AR experiences reach the festival-goers?

To put it in simple terms, all people need is a phone and the rest lies in the hands of developers who build the experience following the artists’ or festival organizers’ visions and those, who then promote it. Luckily, technology is on our side again. There are a lot of distribution channels for AR, meaning you can place an AR experience inside an app, which then people use to scan the codes or surroundings and trigger an AR-powered visual. Nowadays, the majority of festivals gear up with apps, not only because of smoother organization or planning, but mainly – for the sake of the users, where accessibility and additional artistic perks play a huge role.

Apart from apps, Social Media is a powerful player in the world of music, festivals, people – and technology. If you’re looking for a way to promote an event with a bang, engage the audience and let people truly connect – custom-made AR Effects on Instagram, Snapchat and TikTok are the answer.

AR can also be distributed independently through Web-based Augmented Reality (webAR) allowing users to access on-demand AR experiences directly from their smartphones, without the need to download any apps.

Because we not only tell, but also show – let’s move to the zone of music, your favorite artists and new, innovative adventures.

For their Experience + Innocence Tour in 2018, the Irish rock band U2 surprised fans with a truly breath-taking AR experience. The audience saw a huge iceberg projected on an 80-foot screen – but what they did not see coming was that when they pointed their phones to the screen, an enormous azure blue projection of Bono overlooking the crowd appeared. This experience was brought to life through an AR-powered app called U2 AR eXPERIENCE.

During his Coachella 2018 set, Eminem showered his fans with a virtual plate of “mom’s spaghetti” – through an AR app made together with the multimedia production shop Drive Studios. All people had to do was find Eminem’s Mom’s Spaghetti Pop-up located at the food stalls across Coachella and scan the logo on the food container to unlock it.

The Eminem Augmented app provided multiple exclusive AR experiences aside from the Mom’s Spaghetti AR, such as Augmented Anywhere or Live Show Experiences.

In 2018, Maroon 5 joined forces with Snapchat and Verizon to create an AR-powered live karaoke experience for their fans. Using custom Lenses, they could sing along to the lyrics of their favorite songs and catch that magical moment on their phones.

For some years now, Coachella has been exploring visual effects and implementing AR elements into the lineup but in 2022, fans could experience a true visual treat – from their homes. This year, for Flume’s show, Coachella partnered up with Unreal Engine, a 3D computer graphics game engine developed by Epic Games, to provide an immersive experience for those watching the Coachella YouTube live stream. The online audience witnessed a digital performance of huge psychedelic 3D images, trees and a massive parrot drifting above the stage. Unreal Engine, Flume’s artistic team and other tech masters created what can be described as going beyond the physical space and connecting with the audience without any boundaries.

Known worldwide for smoothly merging technology and entertainment, Coachella still proves to be leading the AR music revolution. This year’s edition let users unlock a whole new dimension of the festival, inviting them to Coachellaverse – an interactive adventure and a magical universe open for both on-site and at-home audiences.

Coachellaverse came to life thanks to the power of AR Creators, developers and creative minds from all around the world. Festival goers could explore the space using the Coachella app, travel through portals, follow the navigation and immerse themselves in AR experiences created in partnership with Trigger, a mixed reality agency, utilizing Niantic’s ARDK technology. 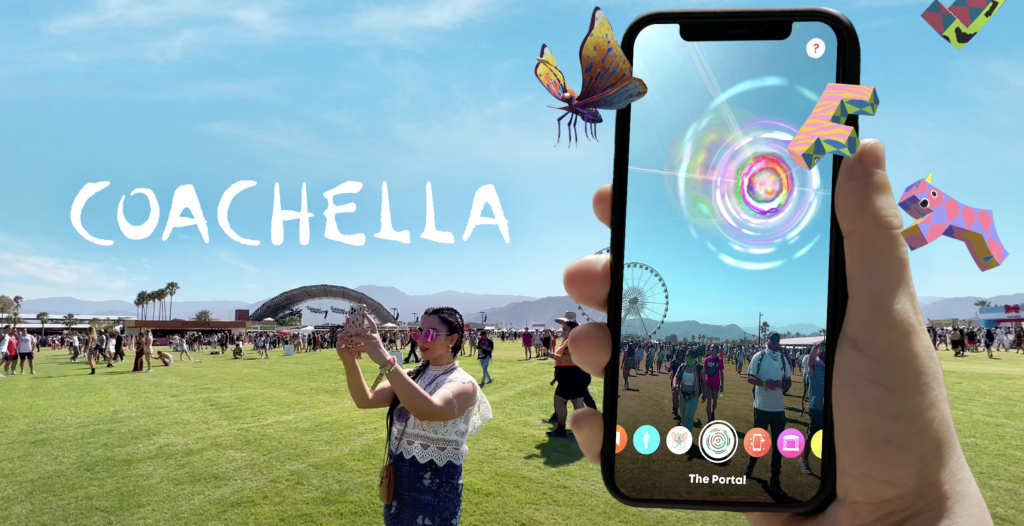 Making memories last with custom-made, Coachella-themed AR Effects is the best way to go back to the good times and share them with others. Coachella collaborated with more than a dozen of Spark AR Creators to build immersive Instagram filters, including Alexis Zerafa, Luke Hurd, Paige Piskin, Helena Dong, Allan Berger, BLNK Digital, Cibelle Bastos, Girls Who Code (GWC), Isabelle Udo, Jeferson Arujo, Mitsuko Ono, Nigel Matambo, and Piper ZY. These Effects will make you glow, fly and feel like inside a magical fairy tale.

You can follow Alexis, Luke, Paige and Helena deeper into their process of building the Coachellaverse with short docuseries.

During this year’s Snap Partner Summit, Snapchat announced a partnership with Live Nation to launch a series of AR experiences at selected festivals and concerts. Using Snapchat’s camera and custom Lenses, festival-goers could capture the best moments of EDC 2022 – the Electric Daisy Carnival, the largest electronic dance music festival in North America. Seeing how EDC’s neon owl comes to life or growing neon plants from below people’s feet was possible thanks to AR.

The future of music festivals

What makes Augmented Reality stand out is its accessibility, ability to connect with people like never before and flexibility. AR experiences have the power to reach millions, therefore being of great use for not only enhancing live shows, but also for event promoters. Keeping people updated, engaged and connected is in everyone’s favor. And the best part is – there is no need for complicated, sophisticated Effects or installations. As long as people feel close to the festival’s artists, image, vibes, themes – they’ll make as many memories as possible. If you give people a space where they can have fun – they will! It could be, for example, through simple face masks, segmentation or picture frames:

The future of music festivals will definitely shift towards even more innovative, engaging, digital solutions – because music is about experience and Augmented Reality is all about making it unforgettable. With technology expanding so quickly and people adapting so excitedly, we’ll soon witness performances we’ve never imagined before.

Winners Announcement: Tomorrow Today – What will the next decade bring? 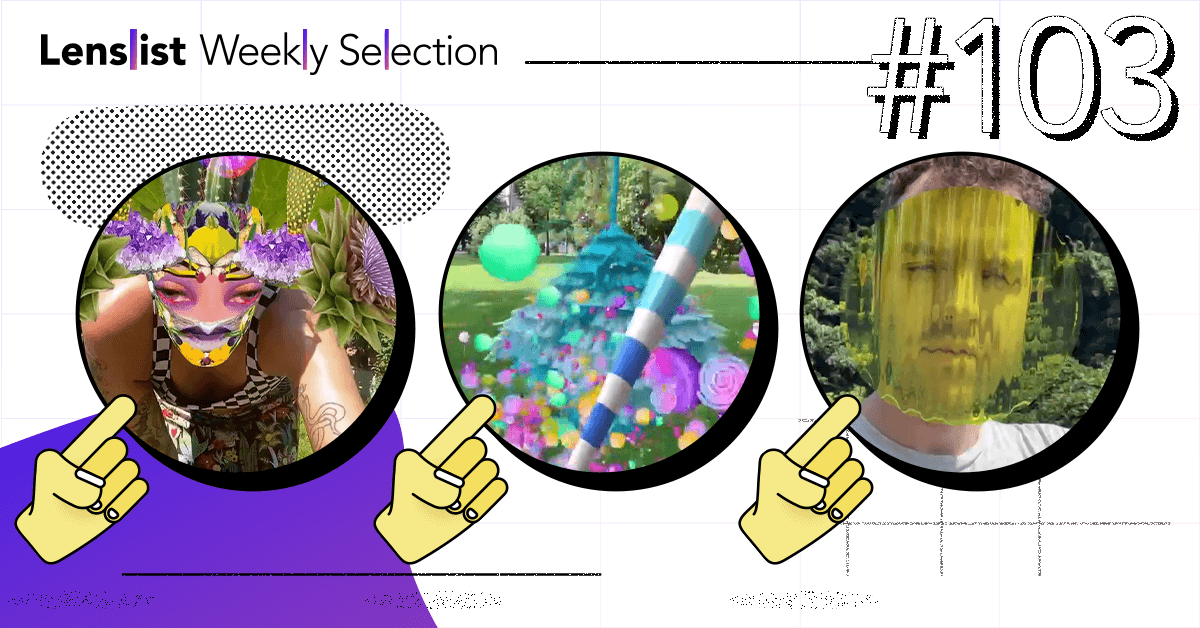