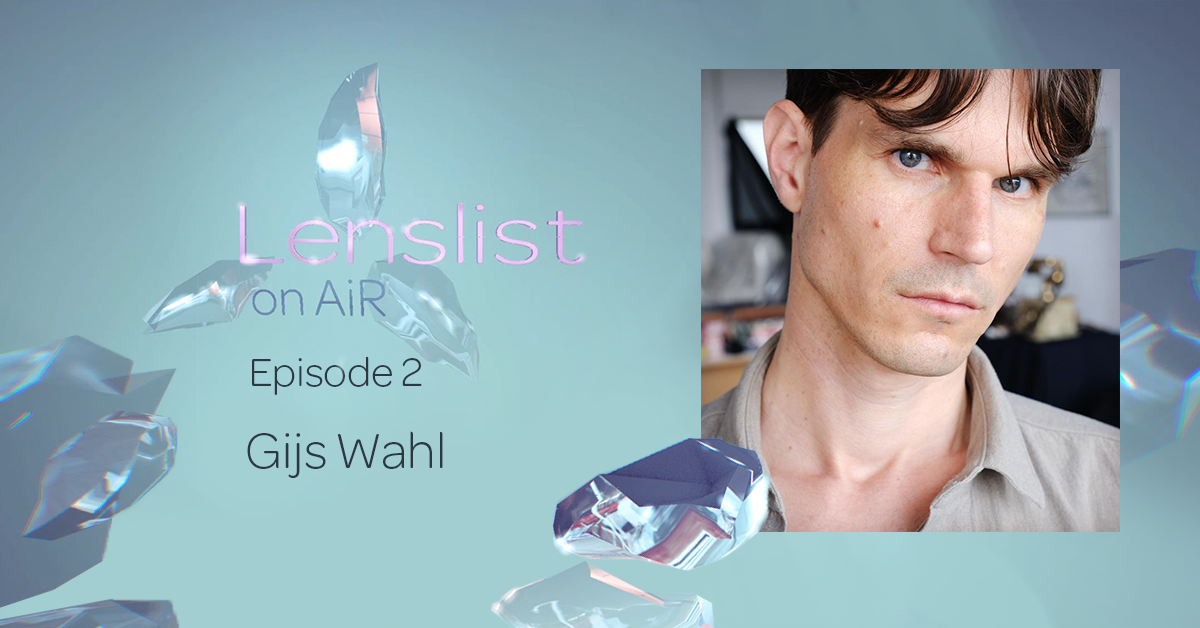 Our dear Creators, the long-awaited second episode of Lenslist On AiR has just arrived and we are buzzing with excitement for today’s interview! You’ll see why… 👀 Rather than an interview, it’s more like a truly artistic and profound journey through the meanings of art, importance of the Community and everything in between – a story told by Gijs Wahl – a Digital Artist based in the Netherlands. Gijs unveils all the mystery behind his process of creation, how he intertwines philosophy with art and… uncovers a project built together with Lenslist! 🤩 Today, we’re AiRing Gijs Virtual Space – a virtual gallery, where visitors can set eyes on Gijs’ artworks and the whole surrounding world which is full of hidden concepts – waiting to be discovered by each of you. 🌊🔍

Gijs, I know that you’ve actually studied Fine Arts at the Royal Academy in Hague and then you studied Philosophy at the University of Amsterdam. When you create your work, you obviously have in your mind a connection between these two spheres – can you tell us more about how you actually see it and how it informs one another? 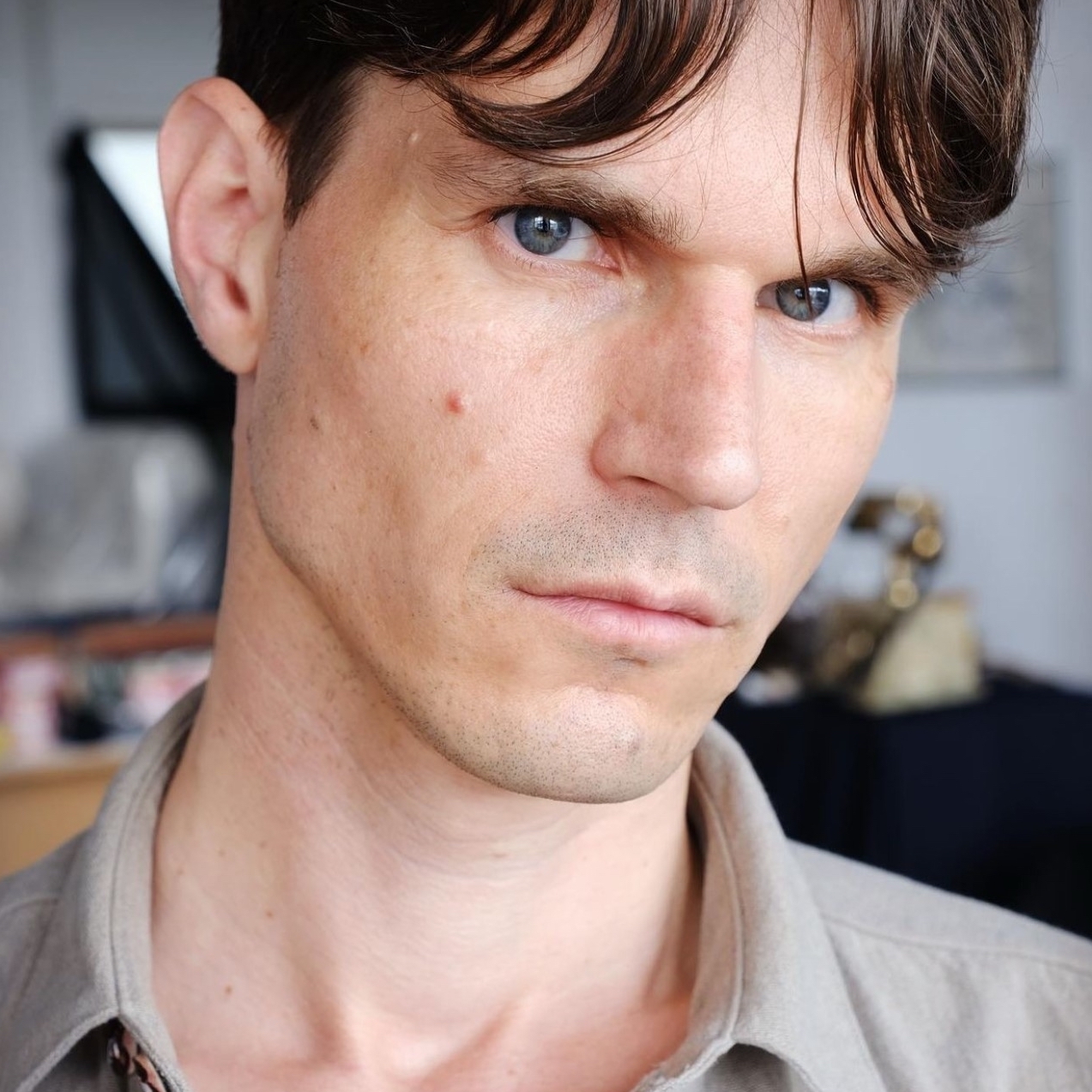 When I was creating at the Arts Academy, obviously you’re much more into material than when you’re working with language – it seems at first – but you always use the concepts, you think about the physical medium you use, and I always felt I needed an escape, like when you make something in clay, but you also want to think about it with your head.
Philosophy for me was a way to change your perspective, not a way to find the truth, but a way to see the world in a different way. And then I noticed that language obviously itself is a medium and it’s not so different from clay. It’s not more controlled or worse, it just comes from somewhere in your head, you didn’t put them on paper at first – they just started flowing. It’s also more natural and more mysterious. I don’t see much difference between them.


How did you come up with creating AR filters?

I wanted to create a space in which I can be creative and then this new medium felt perfect because it is a new medium I didn’t know anything about, so you can start a bit naive – like a child – you can just play with it, you don’t have to have all the heavy concepts you were busy with, or identities I was believing in the end, or what I should be as an artist, all this stuff… I just started playing with it. AR is perfect for that. And then I met the whole Community I didn’t know was there, saw all these people doing it and I felt all these people, so many of them, have like a story where they are a bit different, they are not a part of a big group or they are looking for something like a goth subculture or a way to escape, make yourself appear a bit different from what normal life looks like – and I love this, I thought ‘This is perfect for me because it fits with my whole concept’.


You said that the Community is an important part and all of you think the same and alike and this is why it’s so attractive. Is there any way in which it influences YOUR art?

A filter is used by people. But if you make a filter for people to use that they start moving and dancing or having fun, whatever they do, then as a Creator, it’s not your concept that it’s so important necessarily – it’s what the visuals of it do. And you cannot control this on its own, you cannot know in advance which filters are going to be loved. I don’t like the perfect concept or I don’t like the final conclusion or idea, I just like the messiness and chaos of life and by showing it to the Community, by having friends there or people who seriously look at your work and you look at theirs, you can get a feeling of how people will respond to this, it’s no use making it in your own home and then only showing the final result in your house or to a small group of people, you have to see how it’ll behave on its own – without me. This is why the Community is so important, because to work is in a way so social.


I wanted to ask you about the Gallery that we’re airing together with this interview, the virtual space that we’re creating together.

I thought, how can I show the movements which I tried to have in my works? How can I have that in that space? I thought maybe it could start with an actual 3D space, like classical space, like a museum would look. It would be square, it would have white walls or light walls, it would have benches, it would have canvases hanging to show the works. And then gradually, when you move through the space, the space gets broken in a kind of abstract way, not in a violent way, but it just falls apart a little bit because you’re thinking, why do you need to have a normal space in virtual reality? You don’t need walls because you can decide that there is no wind or you don’t need a roof or so the space gets broken open and a bit more chaotic, and then I can show the more chaotic aspects about my own work by moving through this space, and then I want it to enter space with a vehicle, like a boat, people can imagine themselves that the horizon is forever further. So the space ends there, but it doesn’t end in destruction or in the end of the world. Because it would look like that without the boat. But with the boat, it looks like, okay – you leave from here, here you invent on your own, something like that. So it’s not also about me and my work necessarily, because of the works of our interactions.


Can you please tell me how would you describe your style to our audience?

I would describe it as creating a mess. Like, you start with the AR or with any technology or with paint.You don’t start with a picture that is meant to be perfect – it’s an illusion. Even though that picture in your head appears to be finished, it’s not.It’s something very vague, these synapses firing off in your head. And it’s not a clear cut picture. You experience it like this, but I don’t think it’s true or real. So then you learn to focus more on what is happening while you’re trying to make something.The work exists in layers. So I never start out with a finished idea. I start out with an idea because I’m also made from illusions. But it never becomes that. And I don’t want it to either.


I wanted to talk about one of your works specifically. This work was created for our Call For Content: Those Long Nights. if you could, could you please tell us more about it and about why you actually decided to create it? Because I know that it’s a very personal one.

First of all, I want to thank you for all the great challenges and prizes and I really liked the way it was done and it was done with so much attention and love and different from prizes I knew from years before or how some things work. It was very personal. About the work itself – in the night I make the drawings automatically. You get a big piece of paper and you just start doing like you’re making autographs and little dots and you start doing crazy things and you don’t even look at it. So you just let your child go and you do it very fast. It’s like dancing. So you want to continue to do it but you will end up with just blackness if you do it on the same paper. So you have to remember to take a new paper every minute and then keep them and a few days later you look at them and there’s always a few beautiful parts of it like most of them are awful and you throw them away but there’s always good parts in it and they’re automatic.


I guess that’s what it’s about. The whole work of the Automatist is about the mess.

Yes. But then you have to find a way that it is a mess and not completely a mess. If you use it as a filter, you cannot really influence it exactly. Like I wanted to show this clearly and vaguely.


I’m going to ask you, how do you actually see your future in the AR world?

AR is growing up, it’s becoming very serious. There are a lot of brands working with it, and this is exciting and people are doing very exciting things in it, but it’s not me. So I want to position myself well, not on the other side of it, because I’m not against it. Obviously, it will happen, but I want there to also be artists who work in AR, not just the designers, but artists or poets or people who just search for ways to express themselves, their experiences in the world, how it is today. This is also why I like AR, not VR and AR, but specifically AR in how it is not a world on its own, but it’s always an interaction already with the physical world, between different devices. There’s already a communication going on. So I’m so looking forward to being able to go to an exhibition also in the physical space. And there will be AR works there or ways to change.

What an extraordinary interview! We are completely mesmerized by your creativity, visions, and different theories on art. ⭐️ Not to mention – the Gallery turned out to be a masterpiece, without a doubt, and we’re proud to be a part of it. So once again, Gijs, THANK YOU so much for talking with us and sharing such incredible stories! 💞 And many more to come!