Organizing a contest is one of the 10 purposes of using AR effects in social media marketing. The most popular kind of effects used as a contest’s challenge is, obviously, an AR game. But it’s not the only one to choose from, though, so we would like to share with you some ideas for contests which use Facebook or Instagram AR effects. Also, as there are a few traps awaiting those who want to engage their followers in that way, we’ll acknowledge them and propose some specific solutions for organizing a successful AR contest on social media.

Most of the AR effects containg games have a simple mechanics where your face gestures are used as a controller and the goal is to get as many points as possible. There are also more creative ones which stand out from the crowd, like the one by @vamonke which is called Who is more__? It is a two-player game which resambles wedding compability play. The most important factor when developing a branded AR game is coming up with the idea coherent with your product. For example, Netflix’ Instagram effect No spoilers is a floppy-bird-like game where you should avoid spoilers. Clever, isn’t it?

This special category of AR games has been already used to organize contests several times. It is a quiz where you pick your answer by moving your head or with your face gestures. It can engage and encourage your followers to get to know your product better.

AR effects make for a great source of user-generated content. Original creations, artful references to brands’ identity, neat costumes – the only thing that’s left to do is to encourage your followers to take a selfie and submit it for the contest!

You don’t always need your followers to compete with each other. Just give them an opportunity for fun AR activity and add a little task which will guarantee winning a prize.

A trap: no networking

Regardless of a social media platform, AR effects don’t present an ability to export any data, so any submissions have to be made by taking a picture (or video) and sending them in some way specified by the rules of a contest. It can cause some problems when it comes to processing big amount of entries, but there are ways to avoid them. We mention them below.

There is no obvious choice when it comes to organizing contest on Instagram. If you ask followers to post their photos with AR effects to their feed, many won’t do it as Instagram Feed is considered a place for exclusive and coherent content. So, it is better to choose Stories for sending contest entries – but they live for 24h, so you have to be prepared for processing all of the submissions sent.

The situation is much simpler on Facebook: there, unlike on Instagram, you can comment on posts using photo or a video. Thanks to that fact, the submissions can be sent in that way, as a comment to the post announcing the contest.

Codes: a passive way to give away prizes

As Dominos have shown, you don’t need to collect entries to give your followers a prize for playing your AR game. After accomplishing an objective, a promotional code appears that can be used on a website or in an app.

Messenger Chatbots are the best thing to use when organizing an AR contest. First of all, it is very convenient to redirect to an AR effect (for Instagram or Facebook) and receive an answer in a form of a photo or video, which is then sent by chatbot to a database of entries. What’s more, an immersive, automatic conversation is a tool that can be used to organize a contest from A to Z. You can provide rules and ask for accepting them, you can collect e-mail addresses, and you can explain how does the contest work. When someone opens AR effect, but doesn’t send a photo to a chatbot, it can remaind them of doing that after a while. Finally, when the results are in, you can inform winners about it by sending them a message via chatbot. Cool, huh?

Don’t hesitate to send a brief for an effect and start working with our Creators! 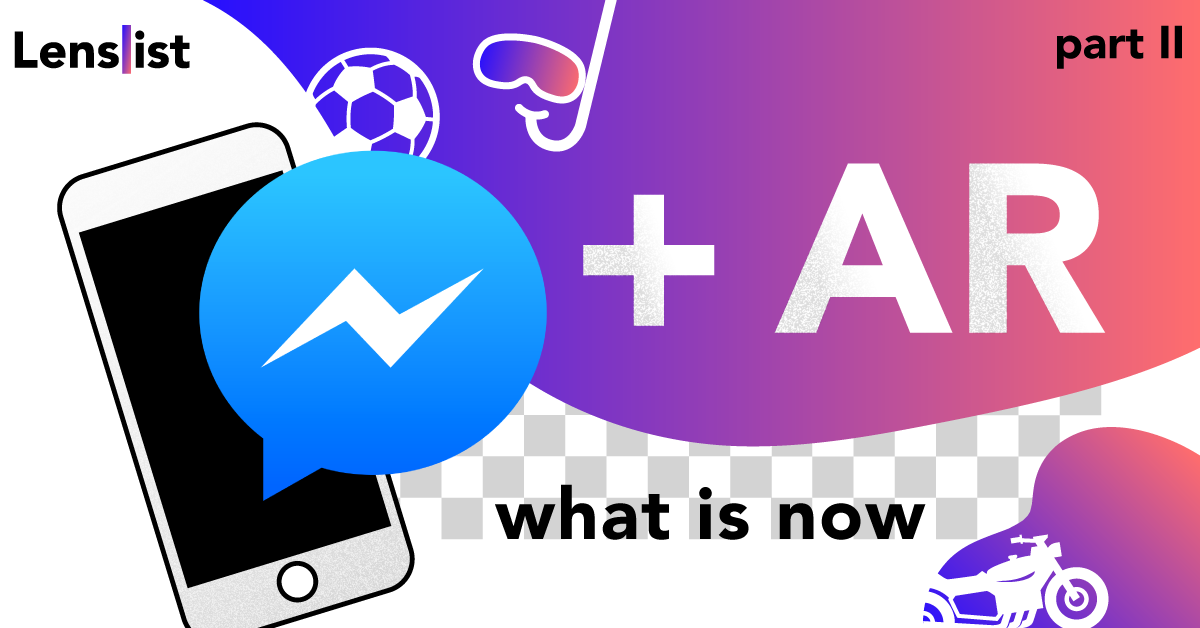 AR + Messenger: What Is Now

AR + Messenger: What Is Now