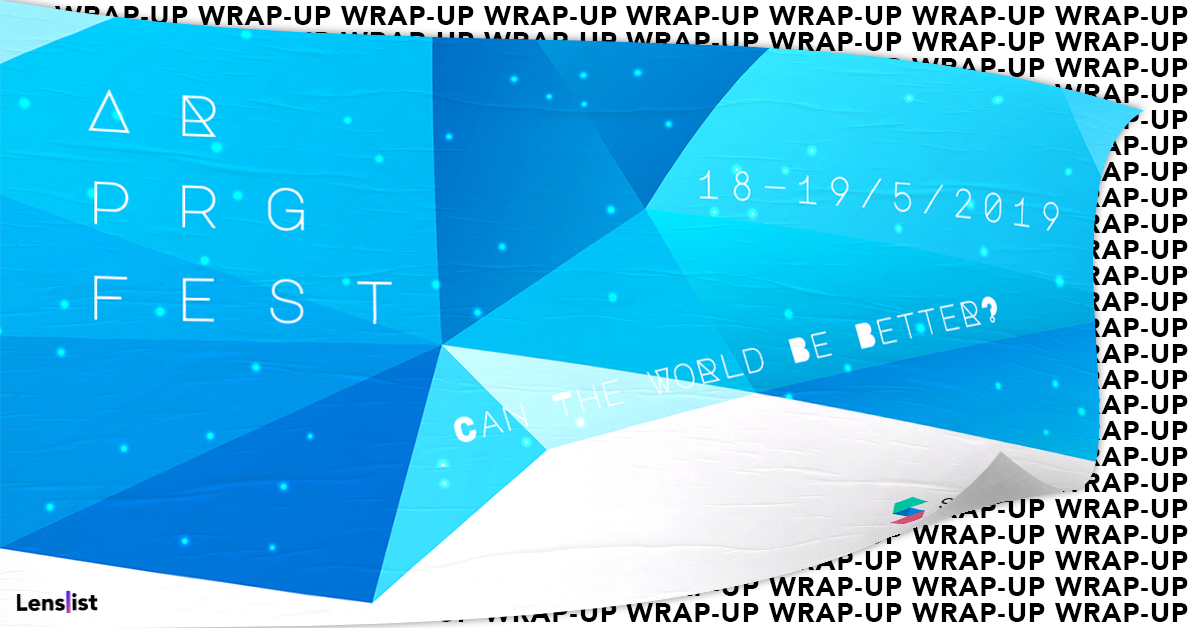 With the end of the first edition of ARFest Prague 2019, Lenslist team is more than happy to recap this amazing event. This article aims at turning the long and detailed report on this conference into an easily-digestible portion of brief information. Without further ado, let’s get to it!

ARFest 2019 started on May 18th, somewhere around 10.20. The event was held in the Impact Hub building in Prague, Czech Republic. Our team arrived right on time to hear out the welcoming words of the organizer, Pavel Max Vincenc. He told the audience how he and Marc Wakefield came up with the idea of the ARFest. Max expressed his belief, that thanks to the events such as this one, as well as the rising popularity of the Augmented Reality, the World is to become a better place.

According to the agenda, Marc Wakefield kicked off the first track of the Keynotes with his presentation titled “294,240,472+ AR effect impressions?”. He started by describing himself as a “regular guy without any extreme background in marketing” and a “natural artist that always wanted to create content relevant to art”. Marc’s journey with AR began with using software such as Unity, Vuforia and Google Cardboard, while he was working on a project for a client (more on this here). During the development process, he got hyped with the augmented reality technology and was very passionate about Facebook’s Camera being announced as the first open AR platform during the F8 2017. The next logical step for Mark was to start publishing his own effects, and to his surprise, the Creepy Clown face effect got very popular. 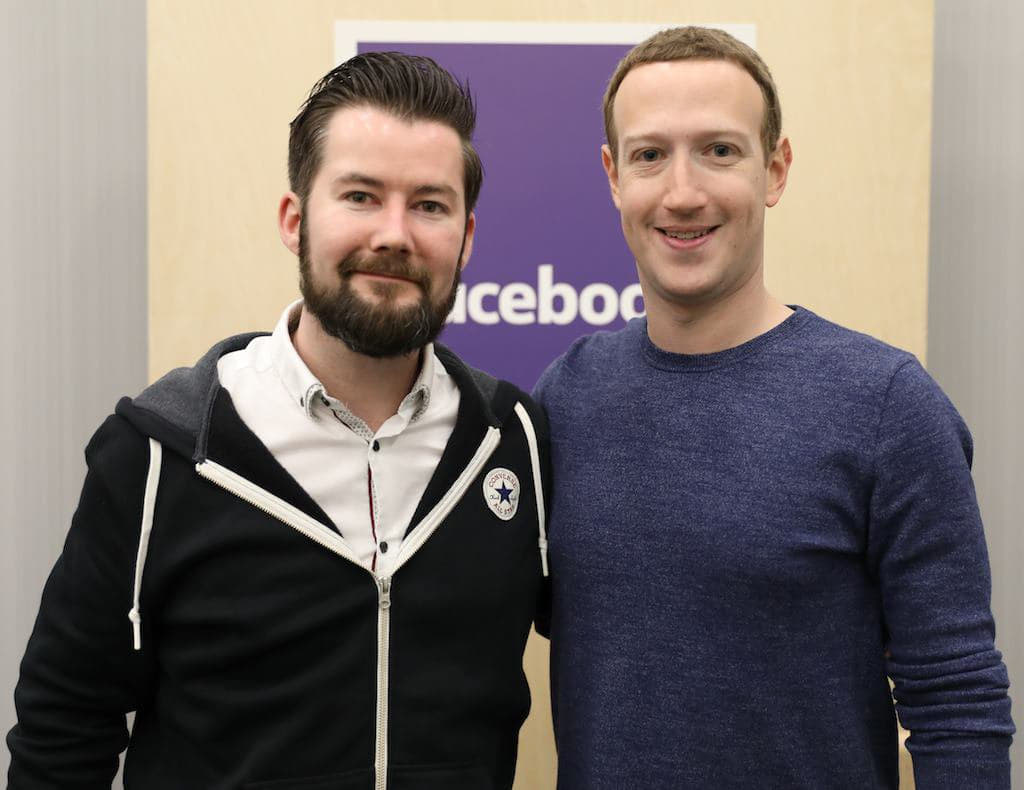 Once that happened, Marc’s career as a full time AR Creator was snowballing all the way through, starting with Bono from U2 placing an order and wearing an AR mask during the band’s worldwide tour, and ending with him being invited to F8 2018 and shaking a hand of the man himself, Mark Zuckerberg.

Eduard Krecmar was the next speaker. Despite the wide and general nature of the topic, he managed to give a detailed, informative and interesting presentation. Eda focused on the history of the Augmented Reality, how the society sees it and in what way the technical aspect influences the popularity of the AR concept.

To visualize to the audience how the AR trend developed on the web, Eduard put three keywords into the Google Trend analytics tool: AR, VR, and MR.

A quick glance at the chart allows to assume, that despite the fact the tools for creating AR experiences were available since 2011 (and those are the same tools that are available now), the society started to realize the potential of augmented reality technology no earlier than 2-3 years ago. Eduard finished his presentation by discussing with the audience the influence of the available software and hardware on the popularity trend of Augmented Reality.

Honza Marcinek’s presentation was by far the most interesting and vivid from the perspective of Sales and Marketing. His agenda included notions such as ways of proper implementation of AR into the marketing strategy, building an efficient marketing strategy, and tips for successful AR brand activation. 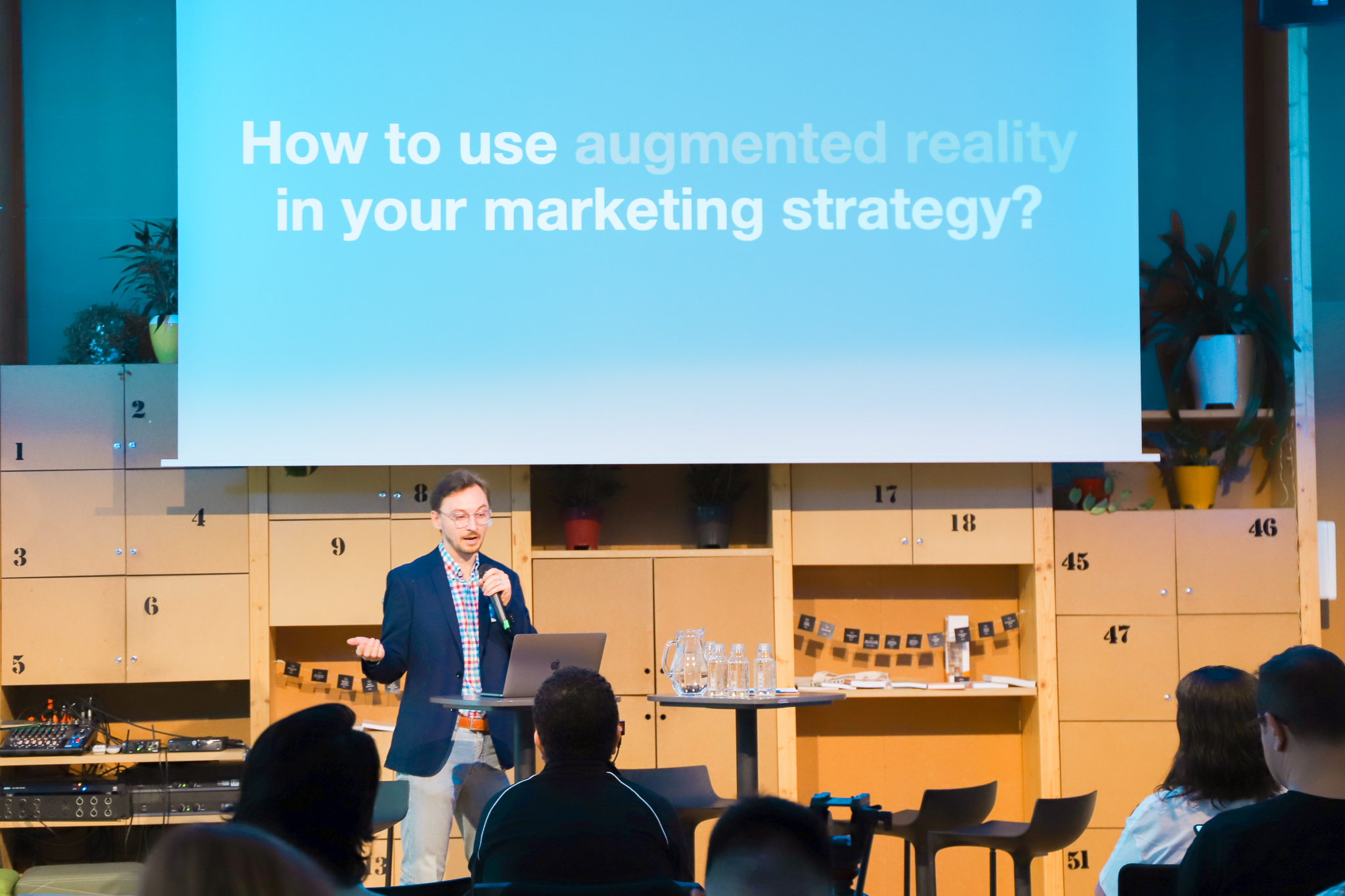 While planning an introduction of a new marketing strategy, Marcinek recommends to first identify the business problem and goal and to analyze indicators such as KPI and ROI before investing in AR solutions. The second step should be to consider which technology and platform suit the brand’s core objective: what type of effect should it be (3D or 2D, using segmentation or serve as a face mask?), should it be released on Instagram, Facebook, Snapchat, or maybe on an external platform? Next thing worth considering is figuring out the way in which the brand values can be reflected in an AR experience to create an emotional connection with the audience. The last step on the way of introducing new marketing strategy using the elements of augmented reality technology is to consider the ways of activation beyond the traditional advertising models.

Apart from that, Marcinek underlined that it is crucial to remember that brands should make AR an authentic extension of their activity. Only that way it is possible to properly build metrics of likelihood and loyalty.

The last speaker of the first track of Keynotes was Stefan Nitz, an avant-garde AR Creator that uses 3D scans in his works. Stefan admitted, that taking 3D scans and photos is in his opinion the best way to catch moments and make memories. His presentation focused on the implementation of the 3D content into the AR/VR apps and projects, including the Spark AR Studio software.

The first track of keynotes ended with a discussion panel, during which the audience was asking thought-provoking questions on the future of AR and the border at which this technology might become dangerous. For Marc, the future of augmented reality means the development of a comfortable and convenient headgear that would resemble sunglasses. He also expressed concerns of people becoming too reliant on this technology. Eduard, in turn, would like to see AR more commonly used in public places like shopping centers – the tech becoming more accessible and practical. He also predicts, that with the growing popularity of this solution, the number of cases in which it will be used in nefarious acts will become a serious problem to society. Marcinek agreed with Eduard and said, that for him the future of AR means it’s applicability in i.e. education sector. 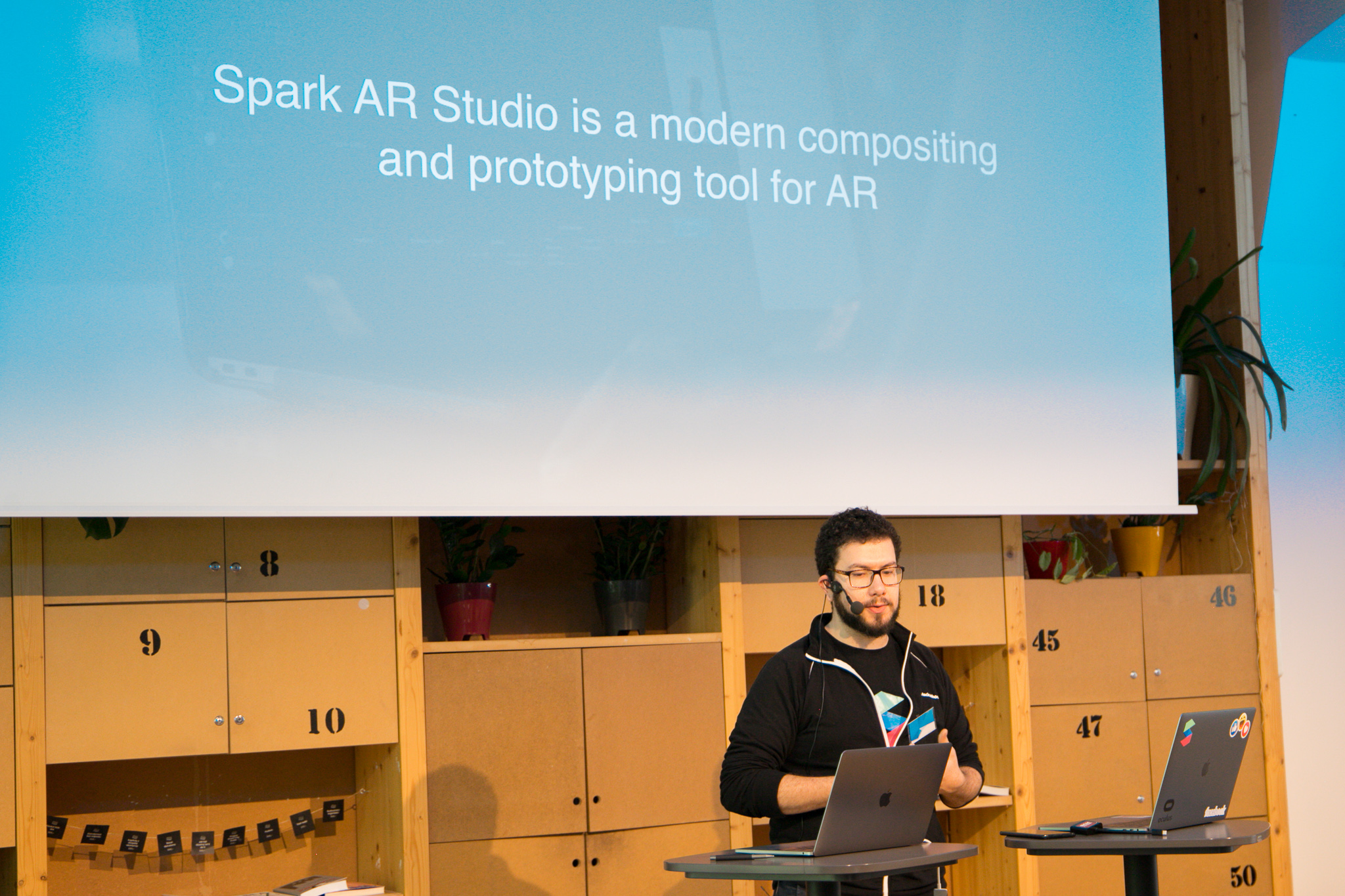 Once the discussion panel came to an end, Edgar Neto, Partner Engineer at Facebook Berlin, took the stage. His presentation “Building the Future of AR with Spark” answered the questions of where are we going with AR, what’s new in Spark AR Studio and what is the future of the Spark AR software. Since this presentation was almost exactly the same as the one during F8 2019, you can dive into its details here. 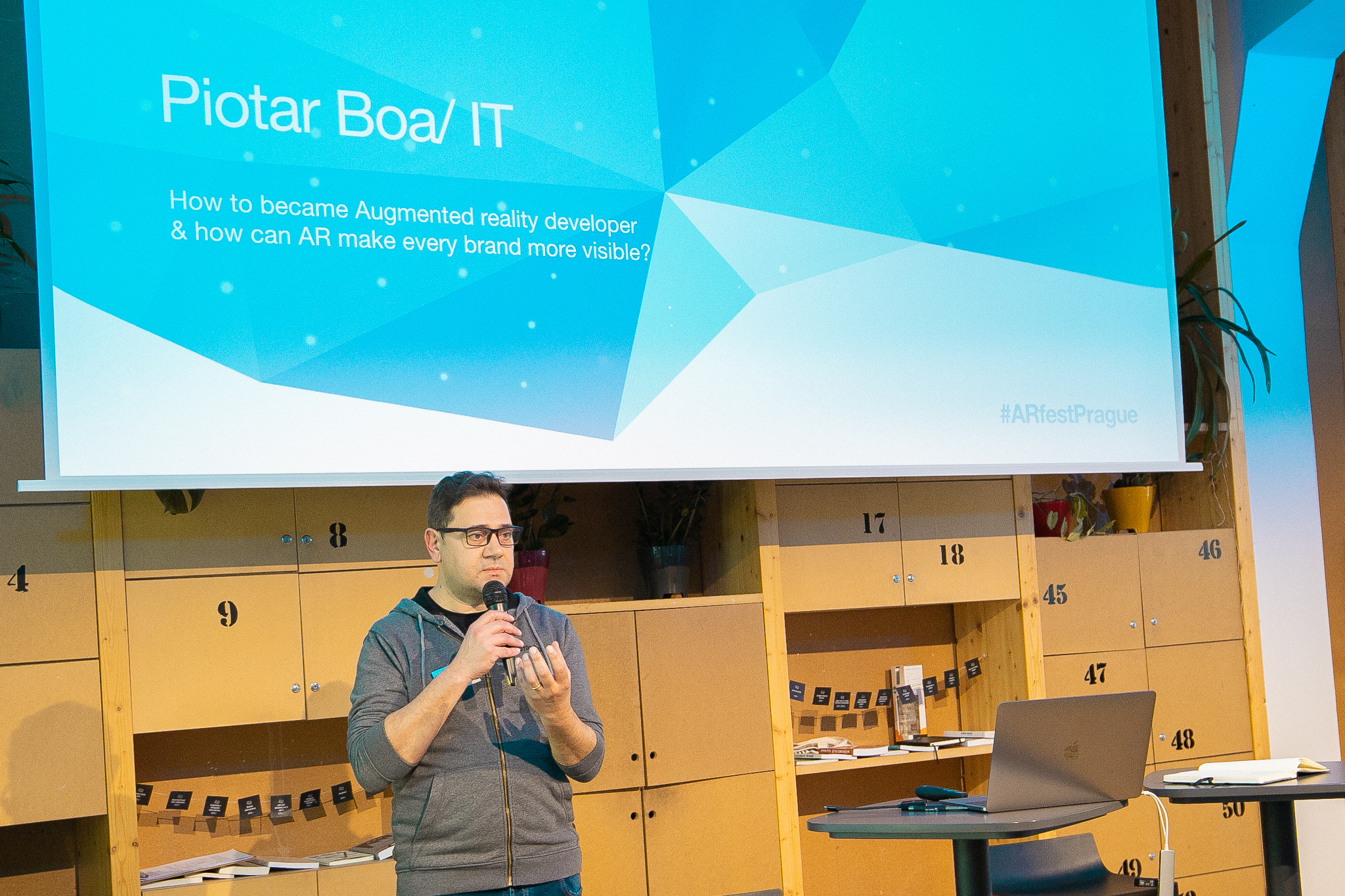 The second track of Keynotes begun with a speech from the AR Superstar, Fabio B. Forgione a.k.a. Piotar Boa. Fabio shared a story of how he first encountered a commercial use of Augmented Reality. He was looking for a present for one of his colleagues that appeared to be a wine expert. Piotar rushed to the store and found out, that one of the labels included a QR code for an AR effect. Once he pointed his camera onto it, a brand mascot popped out of the wine bottle and explained everything about the product. He instantly decided to buy the “augmented” wine.

By telling this story, Fabio aimed at underlining the need of “adding the value” through the AR activation. The brand decided to give its potential clients free and genuine AR experience, and that is what Fabio thinks is the most important thing in experiential marketing. 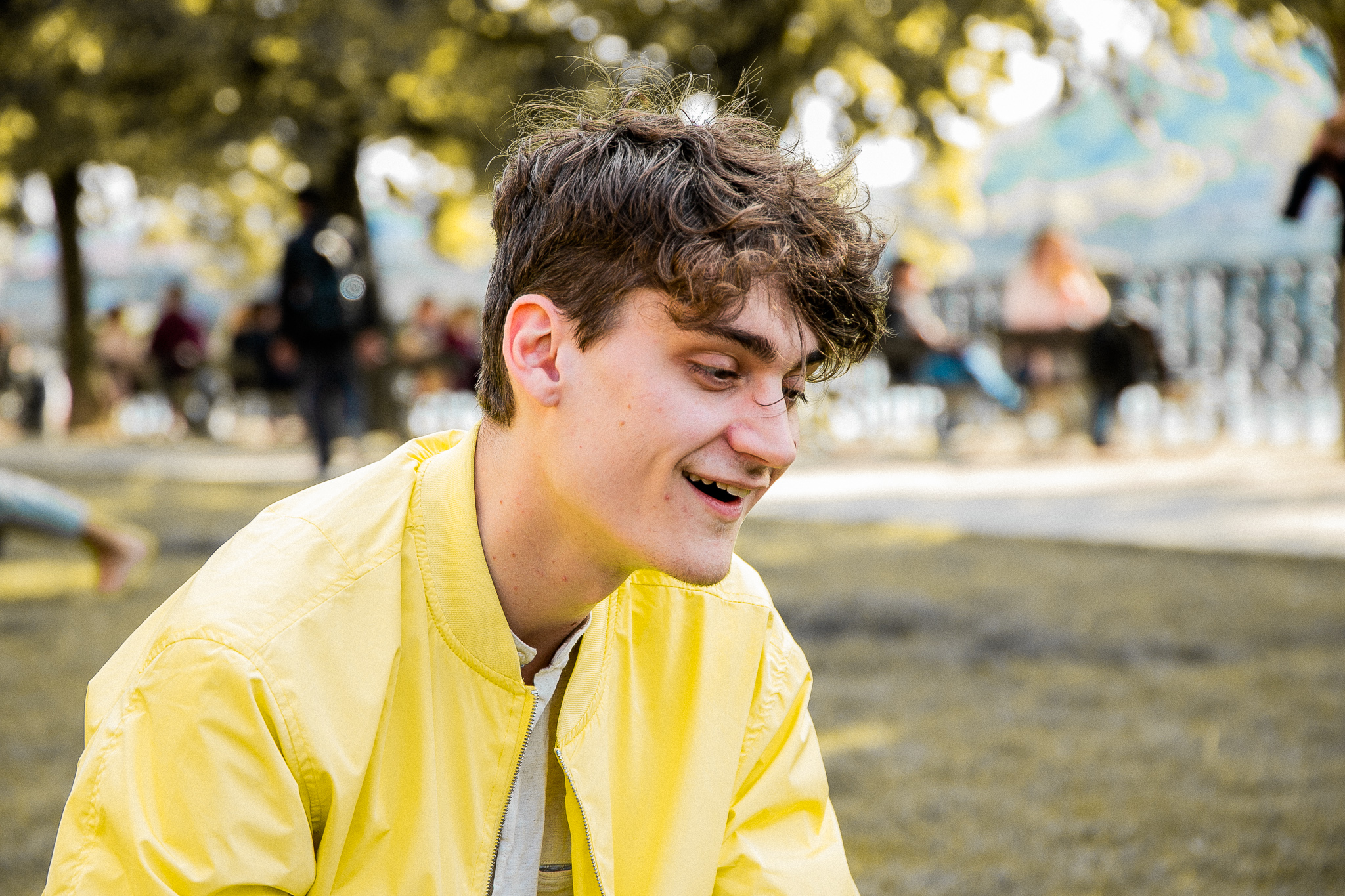 The next speaker, Adrien Carta, AR entrepreneur, game developer and the Director of Kalank Games Studio. He handled a presentation titled “AR is open for new kind of gaming”. It focused primarily on the pros and cons/barriers of the implementation of an AR game. Using his projects like Candy Crush, Palmolive and Horalky as examples, Adrien shared with the audience three tips for the development and implementation process: 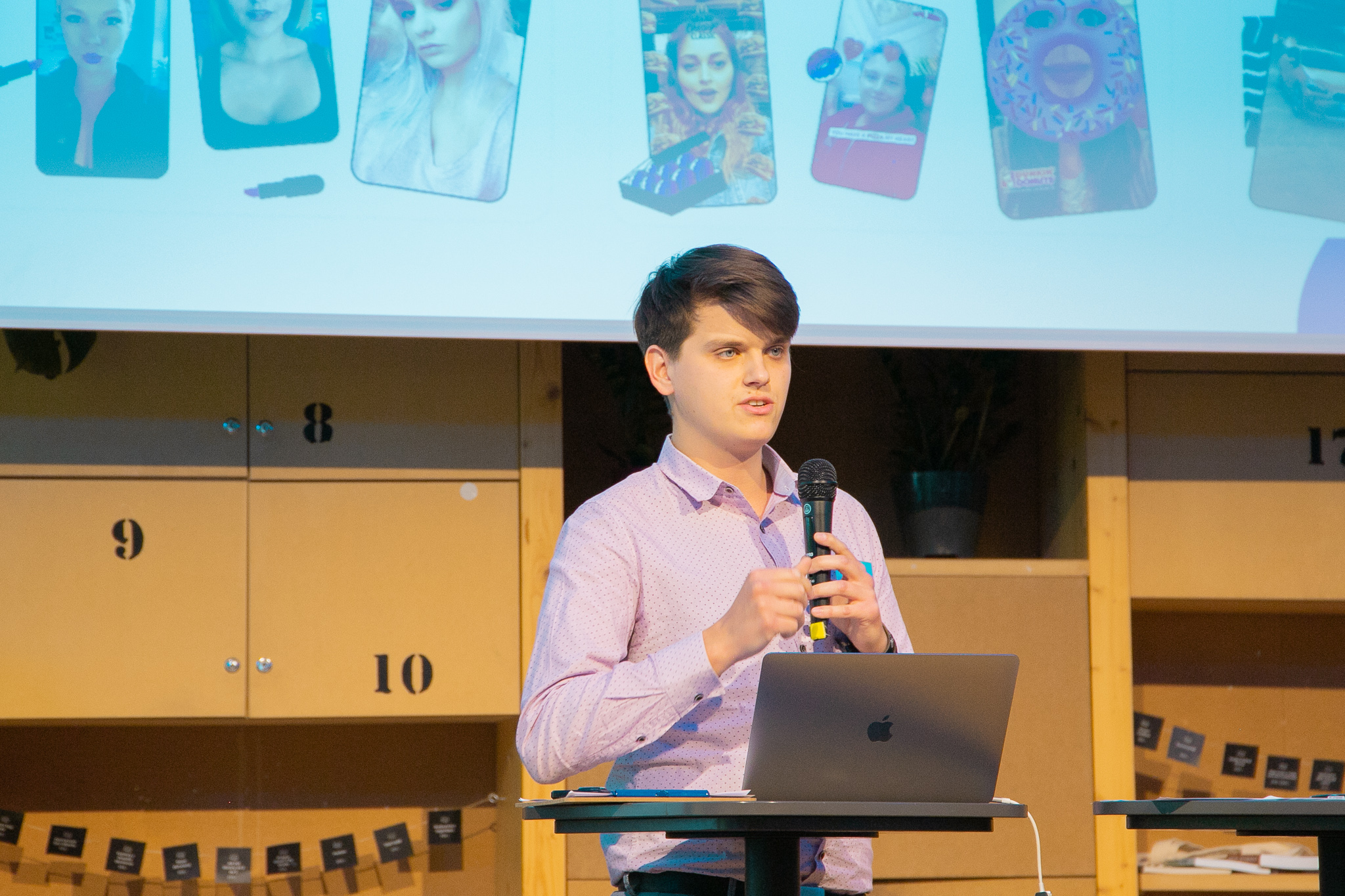 After a short discussion panel and a coffee break, the floor was ours. Mikołaj Walendziak presented to the audience the idea of Lenslist and gave an exclusive preview of what is going to change once Lenslist 2.0 is released.

As he finished, Max passed the microphone to Lluis Rotger Vidal, Associate Creative Director at Geometry Prague. Lluis’ presentation covered one of the projects of his pivotal experience agency, titled Touching Masterpieces.

Touching Masterpieces aimed at aiding blind people to experience art and sculptures in a totally different way as the rest of society. As a result, the team responsible for this project developed a set of VR gloves monitored by the number of sensors. The person wearing the gloves could “sense” the shape of an object uploaded to the virtual reality simulation. The way it works is that the gloves are connected with the rest of the body, and once the hand approaches the VR object, the gear sends an impulse to the brain warning it of an obstacle in proximity. Therefore, “Touching Masterpieces” is one of the first projects that use the sense of touch in virtual reality, allowing blind people to experience details in sculptures like the dress of Venus de Milo.

The second to last presentation of the ARFest Prague 2019 was a story of the rising star of the AR Creators Community, Johanna Jaskowska. She started her speech with a bold statement saying that for her AR effects like Kylie Jenner’s LipKit is not the type of filter that the Instagram members would use. Johanna’s expertise dictates, that Instagram is a platform where people share their lives. Her point was that AR effects are not meant to alter our looks, but adding to it and make it more interesting instead.

Johanna focuses heavily on the aspect of light in her effects, giving her works a rather “plastic” feel. Nevertheless, Johanna is happy with the outcome of her work, of its glossy and slick feel. In her opinion, Beauty 3000 has an ultimate balance between the simpleness and catchiness.

Despite the technical difficulties and health issues of Caroline Rocha, one of the biggest personas in the field of effect testing with more than 60 thousand followers on Instagram, the audience was able to hear out her story via an international Skype call. It all began with her being depressed after the right side of her body got paralyzed. Lying in bed all day, frenchsinger stumbled upon an AR effect on Snapchat. Intrigued by this experience, she conducted research and found out that the AR Community is a booming place full of interactive augmented reality lenses. Caroline decided to share this discovery with her friends and family on social media and as a result, she became a guru and a go-to person in terms of featuring new Facebook, Instagram and Snapchat filters.

During her presentation, Caroline drew attention to the impact AR filters might have on people that suffer from mental and physical illnesses. Analyzing her own case frenchsinger deducted, that people start to tackle their problems once they interact with society and begin to feel needed, useful. The ending of Caroline’s presentation turned out to be very emotional, as she thanked the creators present on the ARFest and encouraged them to make the world a better place with their works.

The conference ended with a stage talk by the organizer, Pavel Max Vincenc and Martin Balcar, Amnesty International leader. Max and Martin admitted, that they have worked together for the past 7 years on numerous projects, i.e. the 3 Minute Campaign or PrisonExit.org. However, the most interesting enterprise from the perspective of the augmented reality is #FreedomSelfie. The Amnesty International team did a bold move and made a Facebook Effect the core element of their latest campaign. Its scope is to free at least half of human right activists that are/were imprisoned. The users of #FreedomSelfie filter are encouraged to sign a petition to free one of the dissidents afterward. 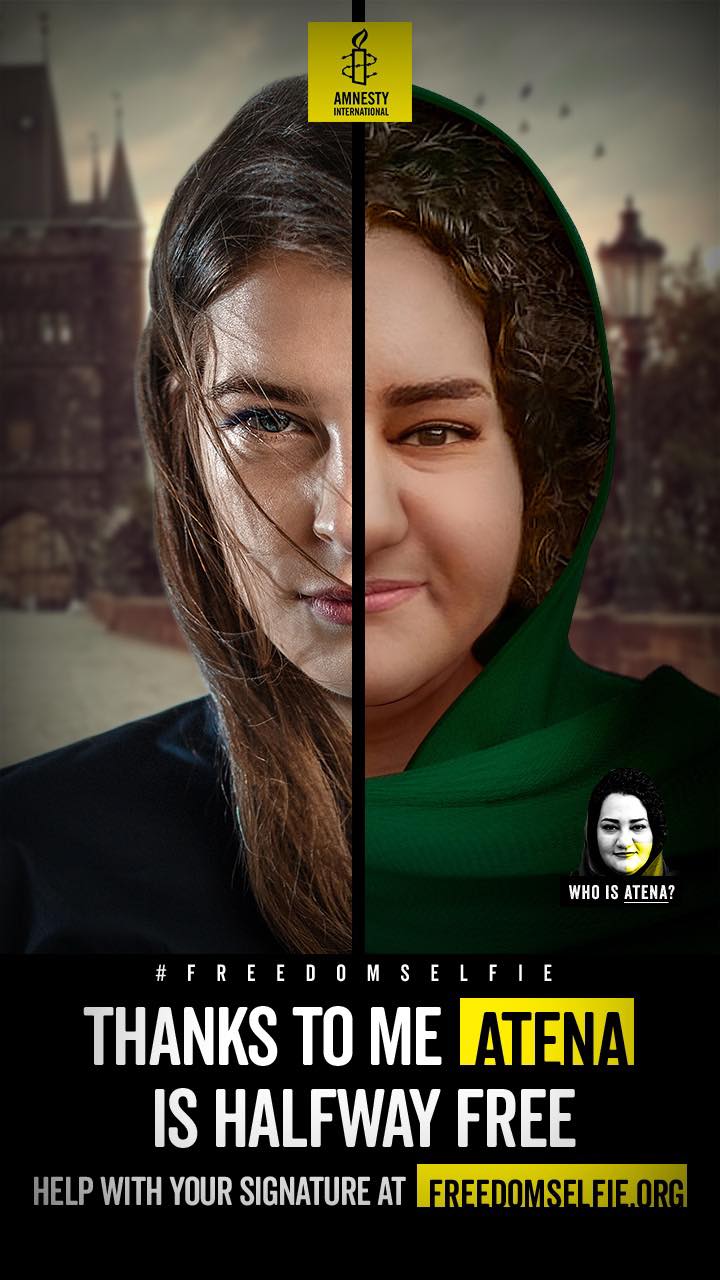 According to Martin, Amnesty International is different from other human rights organizations in a way that it needs people onboard, rather than cheering from the shore. It is thanks to the people that commit and take part in such projects that Martin Balcar and his team are able to enforce the application of human rights worldwide.

ARFest 2019 was an amazing experience for all the participants, presenting different ways of perceiving the AR tech. It is worth remembering, that augmented reality can be applied not only for the entertainment value in the form of camera effects but also as an effective and powerful tool shaping our surroundings. Finally, Lenslist team would like to thank Max for the invitation and organization of the ARFest Prague 2019. it was really great to meet up! Thank you for the read and we hope to see all of you in the 2020 edition!