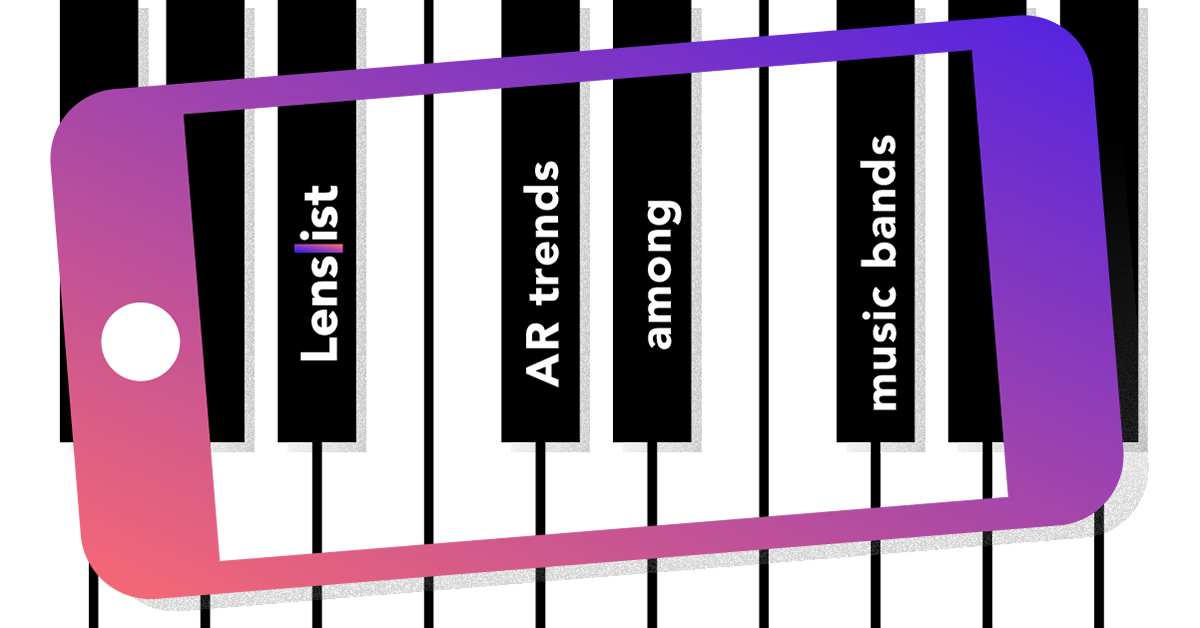 No, this article won’t cover the topic of the Artist and Repertoire (A&R) division in the music industry, responsible for scouting for new talents and overseeing the development of recording artists. Instead, let’s point our eyes and eardrums (yup, those can move, too) in the direction of the true AR, the Augmented Reality!

Lately, AR lenses have gained a lot of traction and popularity among social media society. It has officially become a trend that there are at least one to three new music lenses popping up in the Latest and Featured feed every week on our lenslist.co site. Artists of various genres and labels are realizing the potential of interaction with their audience via the augmented reality tools.

As far as our research goes, there are three main ways AR is being or will be, implemented into the music industry: by releasing a lens connected with the art style of a specific song/album, by enhancing the immersion during the gig, and lastly by using AR as an organization tool during events. Of course, there are numerous different possible usages here, like tour promotion or educational purposes, speeding up the pace at which an autodidact will learn a new guitar lick. However, because of the lack of vivid examples and integral concept for each of these ideas, we will simply omit them for now and observe how their situation will develop.

Match Made in Heaven

The most popular use case of augmented reality occurs along the release of a new single or album. Let’s kick this list off with something hot&fresh.

H.E.R., or more accurately, Gabriella “Gabi” Wilson, is the 21 years old singer rocking the R&B charts across the U.S. since 2016. Having Everything Revealed is on tour right now, and especially for this occasion, she released a Snapchat lens featuring her newest EP “I used to know her: Part 2”. It is a truly immersive experience for all of the biggest fans in and out of H.E.R.’ gigs.

The two next lenses are the perfect example of how labels are already benefiting from the potential of augmented reality. Warner Bros. Records, in cooperation with AR Studio Lens That, have made this year’s Valentine’s Day truly special. The American label decided to create lenses for two of their artists – Lucas Graham, with his single “Love Someone”, and the supergroup The Doors that celebrated their 50th birthday with a song “Touch Me”. The effects went live on social media during the Valentine’s Day 2019 and created a lot of buzz around both Facebook profiles. The fans loved it!

Bring Me the Horizon – Medicine

Bring Me The Horizon is a British band playing metalcore and alternative rock, that with the release of their sixth album saw a shift into genres such as electronica, pop, and hip hop. The seventh track, “Medicine”, describes a relationship with a “negative influencer and how when they leave your life things get much better”. The band has decided to enrich this experience and rolled out a lens that is a true reflection of the artwork in the music video. By using the BMTH Medicine AR effect, the fans can literally spit out the negativity after a toxic relationship to the tones of the new track.

Panic! At The Disco – The Amazing Beebo

This one comes all the way from the release of “Pray for the Wicked” in June last year. Panic!’s extraordinary lens lets you play a role of the puppet version of Brendon, lead singer, featured in the music video for “Hey Look Ma, I Made It”. Although the lyrics might make you have mixed feelings, the concept and execution of linking the music video and social media audience via Snapchat lens are flawless.

The share of the youngest attendees that prefer to participate in music events through their mobiles is rapidly rising. There are artists out there that have acknowledged this trend and, instead of fighting it, are embracing it as an opportunity to deliver astonishing visuals. Two of such performers stand out from the crowd.

Eminem’s gig during the Coachella 2018 was not only the first time he headlined this event but also the first time he introduced his audience to a truly unique AR experience. Marshall started off with a handful of classic songs from his discography like “Til’ I Collapse” and “Sing for the Moment”. But then, by using the Eminem Augmented App, the fans near the stage got shredded to pieces with a chainsaw, literally. The whole thing looked amazing from the perspective of a bystander witnessing the event through the mobile.

Since the early 90s U2 has been constantly pushing the border of what can be implemented as an innovative technical invention to further enhance the immersion during a gig. While preparing for their Tulsa tour in May 2018, the band has decided to invest in augmented reality. The members of U2 fan club received an email suggesting the download of a special AR app available for free on iTunes. Not only did it allow to breathe life into the cover of U2’s newest album, but it has also caused a jaw-dropping experience for everyone acknowledged during the gig. The scene of each show has been specially fitted with a 100-foot-long LED screen that triggered the effects straight from the music video.

The last use case of augmented reality within the music industry puts large scale events at the center. The organizers of festivals of all sorts have now the possibility to implement their own apps with AR as handy event guides. Since there are no examples of an introduction of such a solution on a larger scale, this is merely but a concept. However, once the organizers of such events will realize the potential that lays in augmented reality technology and increasing the organizational flow of the event, it is sure to become a standard feature worldwide. In fact, Coachella is on the right tracks to achieving this point of AR popularity already. Last year, the users of the Coachella VR App could bring their welcome boxes to life and see the spectacle long before its official start in April. Since its marketing team is known for pushing itself more and more every year, there were several“Easter Eggs” hidden within the app that the attendees could hunt for once on the festival. The result of such a combination is not only an extremely effective promotional tool but also a VR/AR app bringing a powerful message to its audience.

AR is gaining a lot of momentum in the music industry. This is great news for all of the AR creators out there, that the only limitation is their own imagination. Hopefully, the amount of the labels introducing AR practices will be rising steadily only to make it a routine to promote bands using elements of augmented reality. If this article hooked you up and you want to find more examples of AR activations coherent to the music industry, head straight to lenslist.co and type any music-related phrase into the search box, or just click the button below. Thanks for the read and see you in the next article! 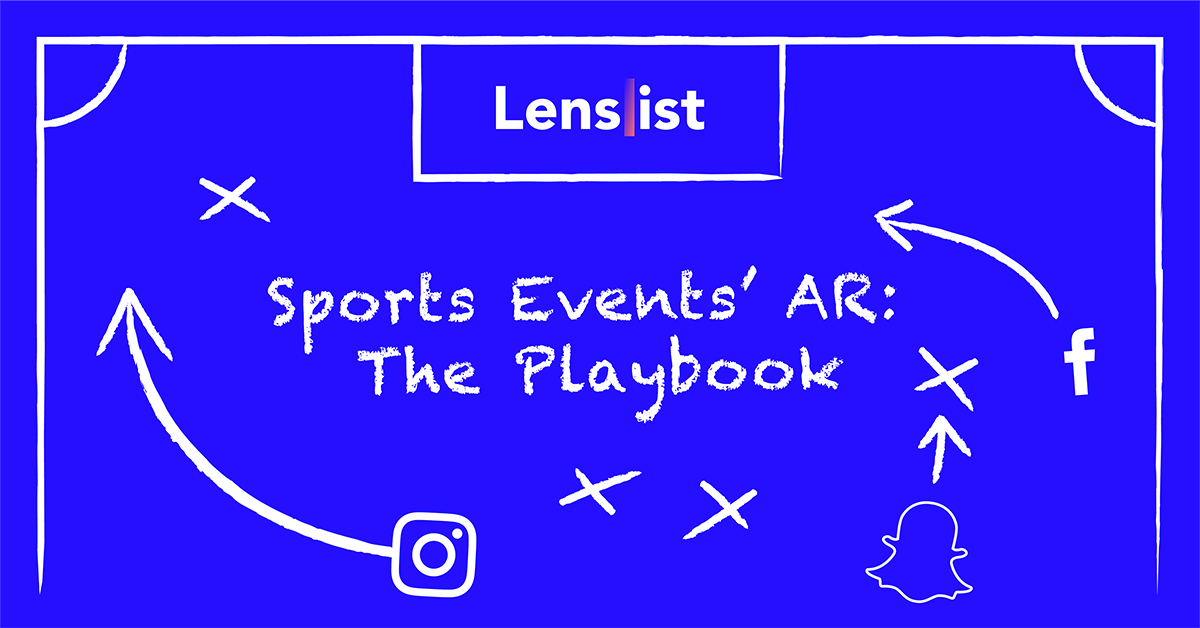